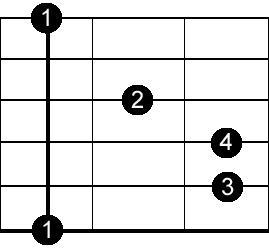 Organize your fretboard knowledge to play any song

Let‘s assume that you have left the beginner stage of playing guitar and know the most common bar chord shapes for major and minor. There are a lot of articles about those shapes so I will brush over these and show them below. What comes next is to organize your fretboard knowledge and orient yourself so that you can play any typical song that you hear with ease. This article will show you how you can develop this skill in no time. Let’s get started with the bar chord shapes. The lowest note of each form is the root note of the chord.

Let’s take the C major scale as a starting point. To be able to play any songs in this key you need to know which chords are in this key and how to play them. Chords in a key always follow a functional patttern – meaning that the first chord in a key always does sound similar in relation to the other chords in the key. Those functions are often noted down in roman numerals. The chords in this scale are as follows:

Since the diminished chord is used not as often let’s leave it out of the picture. That means we have 6 chords that we have to remember for this key. Now choose one of the major bar chords forms and move it so that you are playing a C major chord. Search it now and then look at the solution.

Solution: If you have done it correctly you have used form 1 on the 8th fret or form 2 in the 3rd fret.

Starting from this fret what we are going to do is to look for the shortest way to any other chord. Let’s start with the F major chord. What forms of bar chords could you play and what is the shortest way from each starting point? Again search it for yourself and then look at the solution.

The trick for this approach lies in noticing the shortest path and practicing to use it.

Once you have internalized this it can be applied to any other key you want to play in. You just have to adjust all the frets by the same amount it takes to move one of the C forms to the tonal center of the new key. That means by practicing to master these 10 chord changes in the key of C you are actually working on mastering chord changes in all (!) keys.

Have fun with this!

This article was written by Rene Kerkdyk from Hildesheim’s first guitar school Rock Gitarre Hildesheim. If you are living near Hildesheim and are looking for guitar lessons, give Rene a call!